The opening of the Forum took place in Ayutthaya with the first day of talks at the Phranakhon Si Ayutthaya Rajabhat University (or ARU for short). 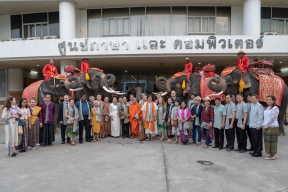 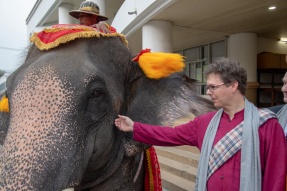 The opening celebration consisted of gifts for the generous host prepared by Prof. em. Dr Franz Gschwind and presented by former Sakyadhita President Dr Christie Chang, followed by speeches, music and dance, and a wonderful authentic Thai dinner. The backdrop of the opening was an impressive exhibition space created and curated by the tireless and generous local co-organiser, the artist and architect Ajahn Dulpichai.

The first day of lectures started with a wonderful introduction by the Vice-Chair of Bodhimitra, Professor Bee Scherer, PhD (Director of the Intersectional Centre for Inclusion and Social Justice at Canterbury Christ Church University in the UK). Locating ILBF firmly within the framework of Socially Engaged Buddhism, Scherer praised the work of past organisers, such as the Chong-Ji order in Korea and the Buddhayana organisation in Sumatra/Indonesia and reminisced about the 2012 ILBF Scherer organised in Spain, while highlighting the importance of an International Lay Buddhist Forum for connecting lay-practitioners, academics and monastics.

The President of ARU, Dr Kasame Bumrungveth introduced participants to the University with its impressive range of scholarly and vocational programmes and conveyed his wishes for a productive meeting.

Interesting talks followed by scholars and practitioners, from Professor Hnin Hnin Aye of the University of Abhidhamma (Yangon, Myanmar) on the use of Buddhist Principles in Human Resources to Dr Saul Tobias (an Associate Professor at Fullerton, USA) on Mindfulness. Dr Phillipe Turenne spoke about the Rangjung Yeshe Institute in Kathmandu, Nepal, as a place of higher education for for scholar-practitioners. Also from Nepal, six Newari Buddhist ‘priests’ and ‘priestesses’ (i.e. householder-monastics) attended the 9th Forum: representatives of the Nepal Traditional Buddhist Association have been an integral part of the ILBF ever since the senior Newari Buddhist leader, the Most Rev. Prof. Dr. Naresh Man Bajracharya, participated at the 6th ILBF in Spain. At the 9th forum, the Newar Scholars Dr. Kabindra Bajracharya and Puspa Ratna Shakya gave a presentation on traditional chanting and ritual sand art in the Newar Tradition.

Important talks by Shermila Milroy and Dr. Damenda Porage from Sri Lanka about the role of women in Theravada and Vajrayana Buddhism led to an animated debate. The prolific Thai-American Socially Engaged Buddhist activist and change agent Nampet Panichpant-Michelsen gave an inspiring, personal account of her life with Buddhism.

Dr Dominick Scarangello of the Lotus Sutra-centred Buddhist movement Risshō Kōsei Kai (立正佼成会), which graciously hosted the 7th ILBF in Japan in 2014, spoke about Buddhist Principles whilst living in a sharehouse in Japan and Master Beobkyung Kim gave an interesting talk about the practices of contemplation and compassion in the Chong-ji order in Korea. The order, who generously contributed to the organisation of the 9th forum, will again host the next, 10th Forum in 2020 in Seoul, to be organised by the current Bodhimitra ILBF President, Dr Hwaling Lee. 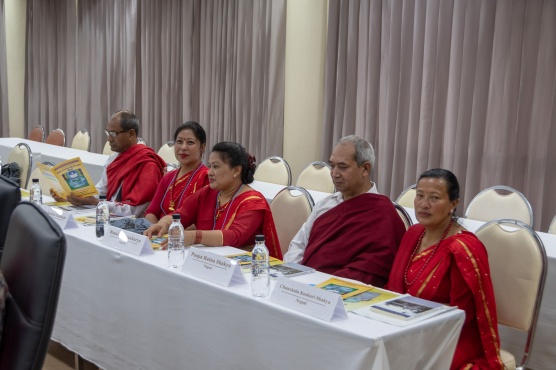 Part of the Newari delegation at ARU 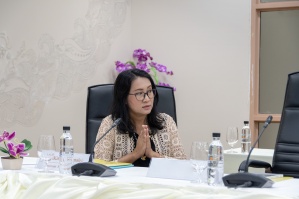 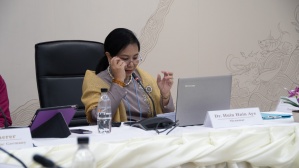 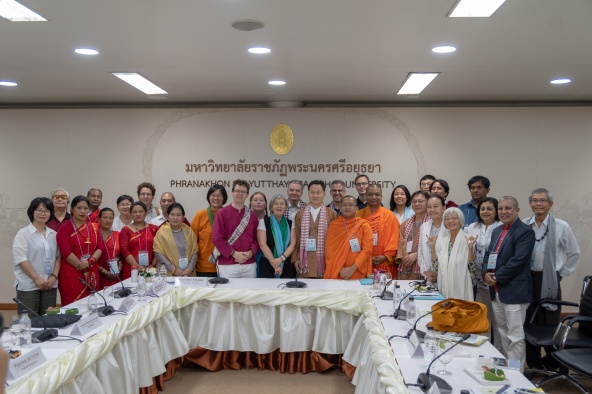 Group picture at the start of the Forum at ARU 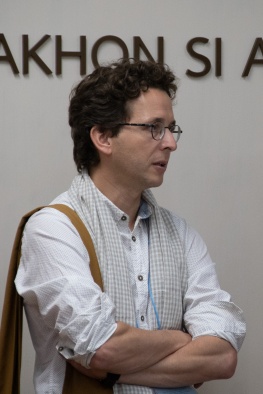 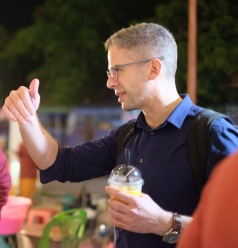 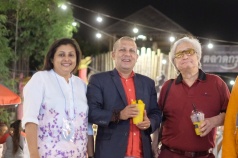 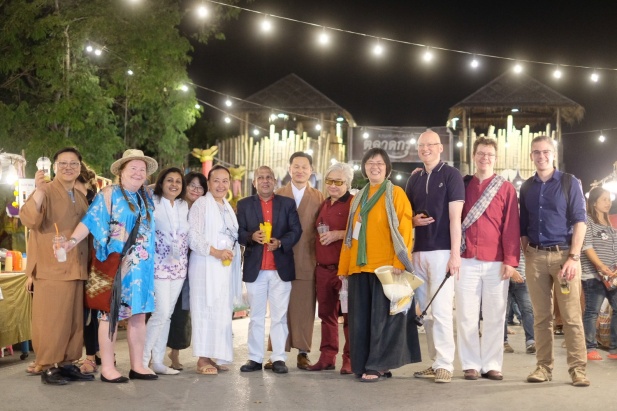 After a light dinner, the participants strolled at their leisure through the famous night-market of Ayutthaya sampling some of the culinary delights Ayutthaya had to offer.

The next day let the participants on a temple tour of Ayutthaya to arrive in the evening at the Thai Hua Fo Guang Shan Temple in Bangkok, a grand temple still under construction. Fo Guang Shan is a Chinese Mahayana Buddhist organisation founded by the Venerable Master Hsing Yun, and is known for their social activism as part of the concept of ‘Humanistic Buddhism’. The abbot of the temple Venerable Hsin Ting and the other Venerables and volunteers of Fo Guang Shan Bangkok gave the forum a very warm welcome. 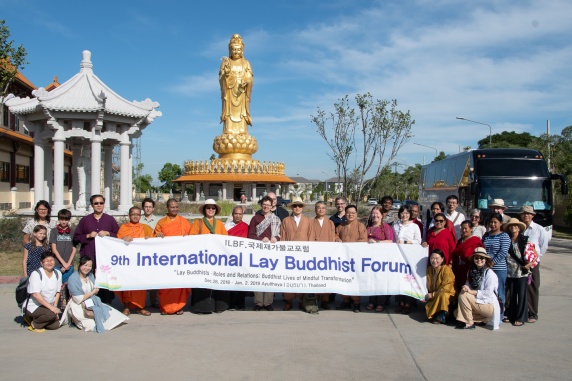 Group photo at the Thai Hua Temple in Bangkok 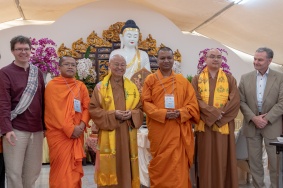 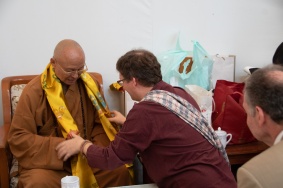 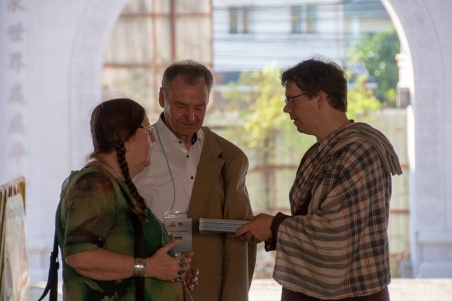 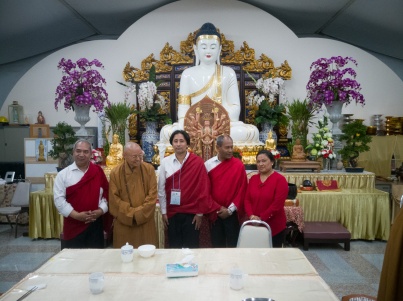 Dr Franz Gschwind, a retired engineering professor and long-term practitioner of Tibetan Buddhism, shared his experience of leading a mindful life; his wife Johanna spoke about the Tibetan Buddhist Rabten community and showed a video of their event of teaching meditation to children. The American Diplomat and China expert Roseanne Freese presented about the changes to Buddhism in mainland China.

Enkhgerel Batsaikhan (Annie) spoke on the changing attitude of Buddhist Youth in Mongolia. Dr Kalinga Seneviratne shared his experiences on non-violence response and Venerable Dhammasiri Thero gave us a glimpse into monastic life in Sri Lanka. 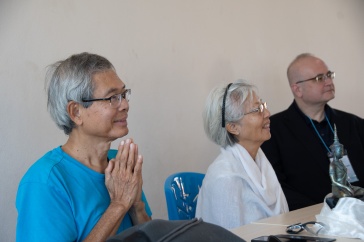 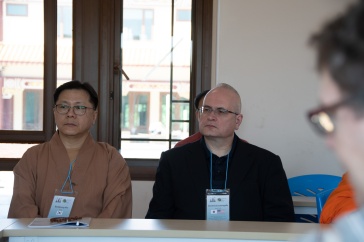 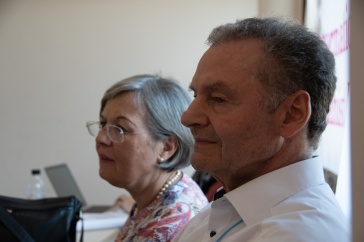 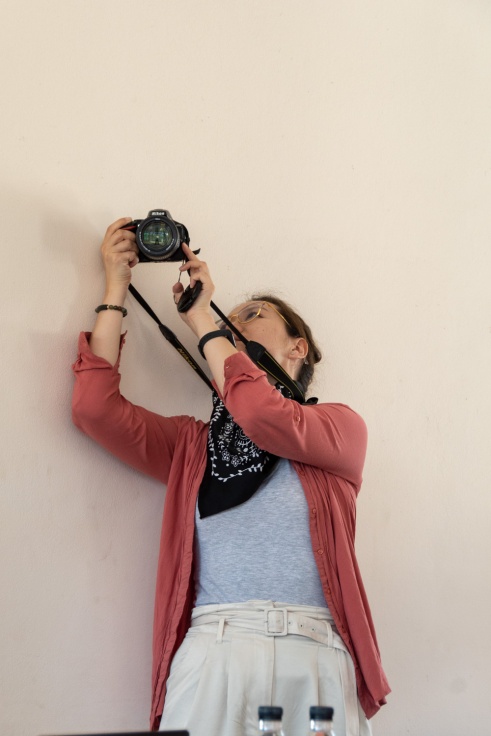 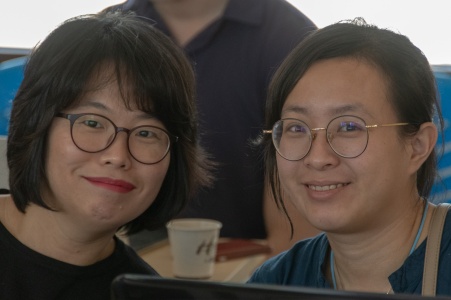 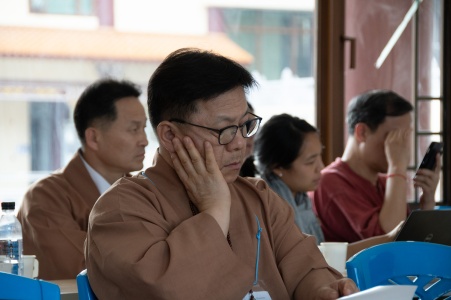 Master Beobkyung Kim listening intently to the other talks 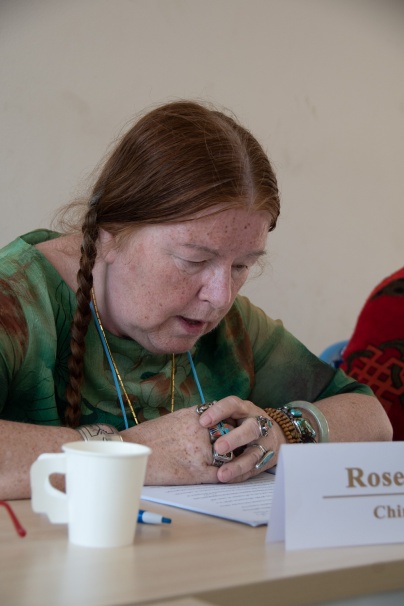 Further, the ILBF Steering Board formally met at Thai Hua Temple and recorded heart-felt thanks to all formerly active committee members, including the previous organisers Dr. Gene Reeves and Dr. Jongin Kim, as well as the former ILBF secretary, Ven. Bhikkhuni Bodhi (Dr. Bong). The committee decided to charge President Hwaling Lee with organising the 10th forum in Korea 2020, with the gratefully acknowledged support of Chong-ji Master Inseon and the assistance of Jogye order volunteer and professional translator Sarah Kim. It was further decided to add the name Bodhimitra –friend/s (on the path) to enlightenment– to the acronym ILBF. This additional name should facilitate an easier recognition and dissemination of the ILBF network.

For the countdown into the New Year, the participants were shuttled to the nearby Wat Phra Sri Mahathat Woramahawihan temple to observe the local community come together to chant and welcome in 2019. 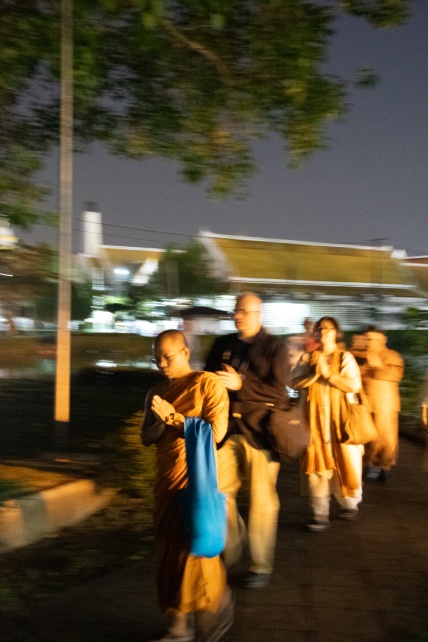 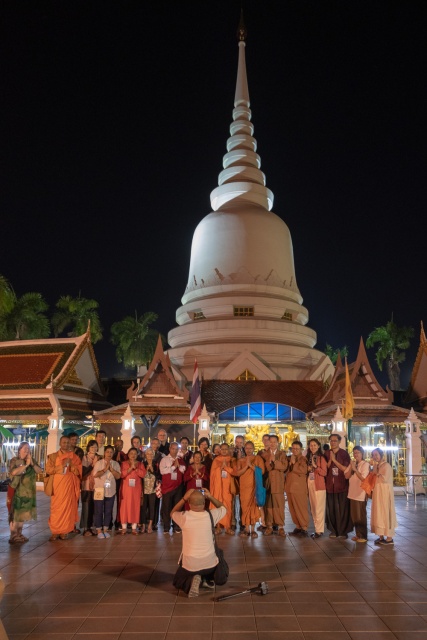 The forum came to an end with a visit to Sathira-Dhammasathan, an impressive oasis of peace, healing and spiritual growth founded by one of Thailand’s most influential and inspiring female monastics, Maechee Sansanee. 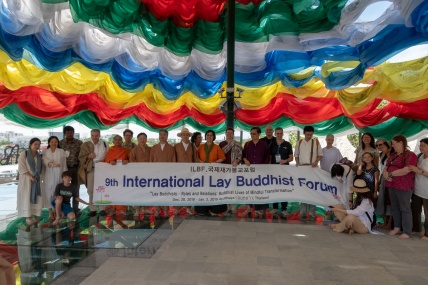 Group foto on top of the Sathira-Dhammasathan 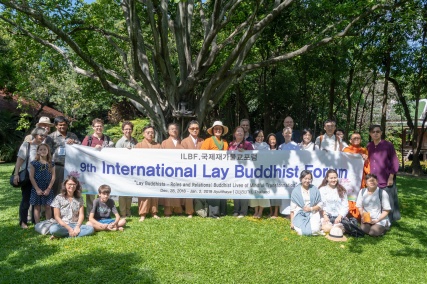 Group foto in the gardens of Sathira-Dhammasathan

A special thanks goes out to all hard-working organisers and volunteers. Special mention is due to those avoiding the limelight: Bodhimitra treasurer Kathy Monaco (Ben Xi) and volunteer April Wang for her tireless work before, during and after the forum, especially during our stay at the Thai Hua Temple in Bangkok.